My peace plan for this ugly civil and proxy war.

Syria will be divided into three or four viable new states. Primary focus on peace, stability, reconstruction and economic development for the population (often returning from the refugee camps in the region and Europe and already being drifting).

From the Syrian refugees, military and police units are formed and trained by the UN, the EU or “Coalition of the willing” where necessary. In order to help stabilize certain areas and get rid of the now often radical groups. Which, I expect, continue to offer some resistance from their own radicalized ideology or fuelled by neighbours with other agendas.

That one of the new states (Alawite sector), on the west coast of what was once Syria, will be governed by the current regime of dictator Assad the international community must accept for the time being.

Another eastern area is likely to become the new state of Kurdistan in the region (so also parts of Turkey, Iraq and Iran) in a number of steps.

A large middle area develops into a viable new state with an expected Sunni majority in terms of population.

In addition, Turkey will play an important stabilizing and supporting role, especially towards the new Sunni majority state. Minorities must also be explicitly addressed in these new states, and this is also guaranteed internationally and, if necessary, protected by police or military means. 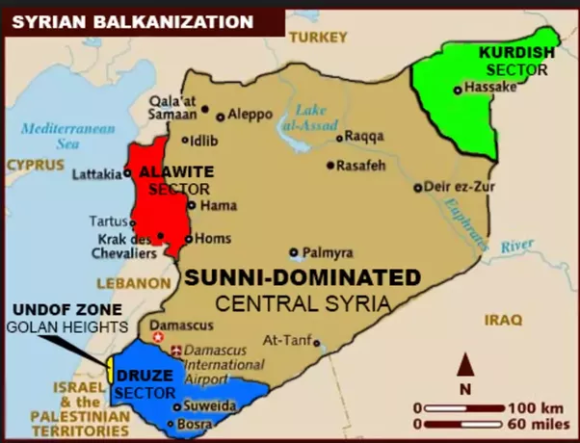 (This map is not preferred division..just an example)

This site uses Akismet to reduce spam. Learn how your comment data is processed.

Translate into other language